In a recent blog post, I explained why the Instawork engineering team moved our web development from the popular SPA + API architecture to server-side rendered web pages. Server-side rendering lets us develop new features quickly using a single language (Python) and a single integrated framework (Django). Adding Intercooler.js to the mix gives us SPA-like interactivity, while still keeping all business logic and HTML rendering on the server.

The level of productivity we were able to achieve with Django + Intercooler was incredible, but the impact was relatively small. That's because Instawork's main platform is not the web, but mobile. The vast majority of our users access Instawork through native iOS and Android apps. And on mobile, we were still using the very architecture we just ditched on the web: a thick client (written in React Native) pulling data through a JSON API.

Thick clients are the industry-standard architecture for native mobile apps, but we started questioning why it seemed to be the only option. Thick clients make sense for some categories of apps like games, photo tools, or anything that relies on local state & data. But a thick client is not a great fit for networked apps like marketplaces or social networks, where an Internect connection is a requirement for the app to function. The root of the problem:

Implementing a networked app as a thick client requires business logic to be split and duplicated between the backend and frontend.

The code duplications add complexity and development time, since the same logic needs to be implemented twice. The frontend/backend splits add headaches once the userbase is on multiple app versions, with each version making slightly different assumptions but all interacting with the same backend.

Once we realized that networked apps are a poor fit for thick clients, we started looking for a thin-client mobile framework to adopt. The best solution out there seemed to be HTML + JS web apps bundled in a native wrapper (such as Cordova). We found this solution to be a little clunky for our needs: HTML was not designed with mobile UIs in mind, resulting in poor performance and less than ideal UX.

We didn't find an existing thin-client framework for native mobile apps. So we built our own.

Hyperview Client: a mobile library (on top of React Native) that can render HXML. The client can render any HXML screen and handle navigations & interactions by making further HXML requests.

On the web, pages are rendered in a browser by fetching HTML.

With Hyperview, screens are rendered in your mobile app by fetching Hyperview XML (HXML).

In HXML, mobile app screens are defined in XML format using a core set of attributes and tags. The experience writing HXML should feel familiar to anyone who's worked with HTML:

HXML has tags for common mobile UI patterns, like section lists or headers. This makes it easy to create a list with sticky sectioned headers, without the need for scripting or tricky CSS:

HXML's input elements allow complete control over styling to create more customized forms. In HTML, input elements are limited to certain appearances and semantics, like "radio" or "checkbox". In HXML, flexible elements like <select-multiple> and <option> can be rendered as checkboxes, tags, images, or any other appropriate visual treatment.

In HTML, the basic user interaction is the hyperlink: users click an element, and the browser requests a new page.

Hyperlinks on their own are not expressive enough to build interactive web apps, so developers use Javascript to create more complex interactions.

In HXML, the behavior syntax can express a large class of user interactions with declarative markup.

With HXML, it's possible to create a rich mobile UI in pure XML, without the need for client-side scripting. In fact, HXML doesn't even support scripting, meaning all state and business logic remains in one place on the server.

The Hyperview client library exposes a Hyperview React Native component that can be added to the navigation of an existing React Native app. The most important prop passed to the Hyperview component is entrypointUrl. When the component mounts, it will make a request to the entrypoint URL, expecting HXML in the response. Once the client receives the response, the HXML gets rendered on the current screen. Behaviors in the HXML will result in navigations or updates to the current screen. The client handles these behaviors by making subsequent requests for new bits of HXML, and the cycle can continue indefinitely.

In other words, think of the Hyperview client like a web browser, but for HXML. The entrypoint URL is like a hard-coded address in the toolbar, pointing at your homepage. The homepage contains links and forms that result in more requests for more HXML. The true power of the thin client becomes apparent when you realize that with a single entrypoint URL and server-driven layouts, there are endless possibilities to add and modify screens and interactions in your mobile app. 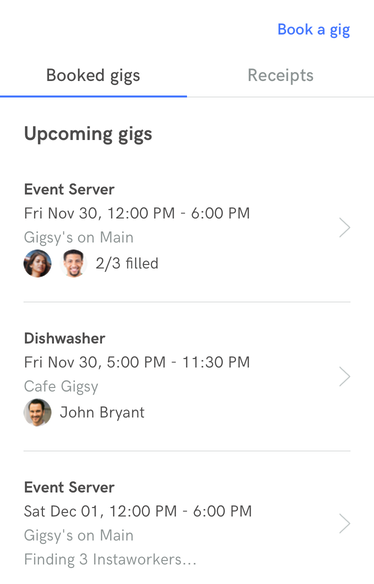 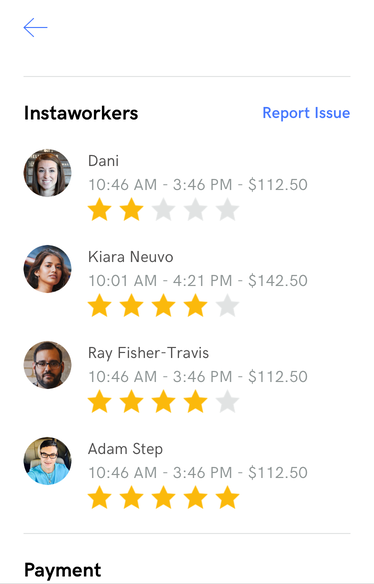 Over the last 6 months, Instawork has used Hyperview in our mobile apps to implement dozens of screens. The experience has been fantastic, and we're doubling down on our use of Hyperview in more of our core app flows. Here are just some of the advantages we've already experienced:

Focus on features, not architecture

In a thick client/JSON API architecture, developers need to make many architectural decisions when building a feature:

With Hyperview, the API-related architecture decisions go away, and the developer can focus on the important parts of the feature:

We didn't set out to make our app faster with Hyperview, but that's exactly what happened. In our older code, screens would sometimes require data from multiple API requests before they could be rendered. With Hyperview, each screen just makes one request, significantly reducing latency. Additionally, the Hyperview response contains only the data needed by the screen, unlike generic API requests that may return extraneous data.

When we're ready to ship a feature, we just deploy our backend. Our apps pick up the new HXML content the next time users open the app. If we discover a bug, we just rollback our backend and 0 users remain affected. Hyperview enables Continuous Integration and Continuous Delivery strategies for native mobile apps.

Consistent experience for all of our users

Since our Hyperview screens are always pulling the latest designs from our backend, we can assume that every user sees the same version and feature set. This is incredibly important for efficacy and fairness in a two-sided marketplace like Instawork. With Hyperview, we know that users aren't disadvantaged because they're using an older version of our app.

Hyperview is truly the best way to develop networked apps for mobile devices. Based on our experience at Instawork, it takes some time to adjust to a thin-client paradigm when working with mobile apps, but once you get used to it, you will not want to go back! There are many ways to get started: