Make sure yarn is installed on your system before continuing.

From the repo root directory:

In a separate shell, install the demo dependencies and start the development server. From the repo root directory:

The next step depends on whether you want to run the demo app in the iOS simulator, on an Android Virtual Device, or on a physical mobile device.

Running on the iOS simulator

From the demo/ directory:

This will open the iOS simulator and install the demo app in the simulator. It will then start the Expo development server to load the demo app.

Running on an Android Virtual Device

From the demo/ directory:

This will open an AVD and install the demo app in the emulator. It will then start the Expo development server to load the demo app.

Running on a physical device

On your physical mobile device, install the Expo client

Make sure your mobile device and development machine are connected to the same network.

Open /demo/navigation/AppNavigator.js in a text editor. In initialRouteParams, replace the host in the url (http://0.0.0.0:8085/index.xml) with the IP of your machine. This is needed in order for your physical device to be able to request the example XML files from your development machine.

From the demo/ directory on your development machine:

This command will start an Expo development server and open a webpage (http://localhost:19002). This webpage will display a QR code. 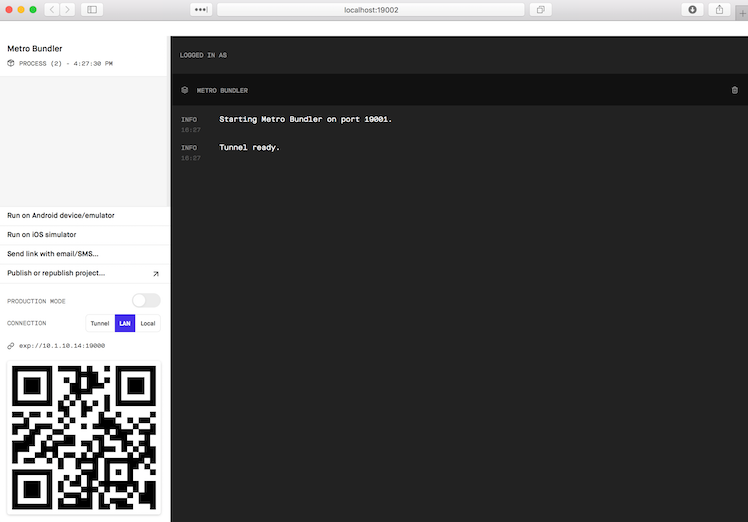 Whether you're using a physical device or simulator, you should now see a Hyperview screen rendered from the example server:

The example server responds with files in the ./examples directory. You can modify or add files in ./examples and the server will update without restarting. to view your changes, simply navigate back to the changed page.

This version of the Expo app is out of date. Uninstall the app and run again to upgrade.